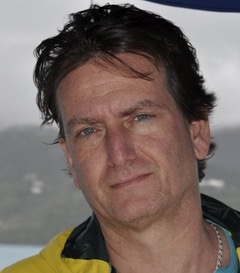 This email address is being protected from spambots. You need JavaScript enabled to view it.

I moved to Washington DC in the early ‘80s but did not learn about Annapolis until almost 20 years later. I joined a boating club and sailed solo on a Hunter 28’ over much of the Bay. Over time, I took classes and gained more experience. We took our kids on several sailing trips in the Caribbean and then in Greece, on both the Aegean and the Ionian. Retracing the route of Odysseus on a 39’ Bavaria was a highlight. Around this time, I started a small boating company Maistros Sails, which is Greek for “benevolent wind,” the prevailing wind on the Ionian.

I planned to race in Annapolis to Bermuda in 2012 but work got in the way. When August came along, I sailed up to Boston in a Jeanneau 409 with a few friends and created my own “A2B.” I’ve gone up and back to Boston almost every August since, occasionally sailing solo. Frequent stops include Block Island and Nantucket, and then further up the coast to Marblehead and Rockport. And a good part of August is spent on a mooring ball in Boston Harbor, enjoying a great view of the city at $50 a night.

I’ve always liked sailing the Chesapeake and remember many trips, heading down the C&D Canal in the middle of the night, maneuvering through Elk River, past Turkey Point, down the Upper Bay, past the lights marking the Patapsco River, and then seeing the Bay Bridge at early morning. I also finished two DelMarVas and several Down the Bay races, one year with winds at 30-35 kts, another year with the wind barely above 10 kt. Each season on the Chesapeake is an opportunity to return to favorite destinations and discover new places to drop the hook and let the kids enjoy the water fights.